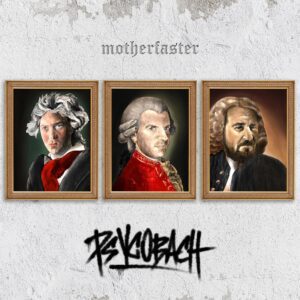 Concerto for guitar, bass and drums in A minor. Maybe murder in A minor! Or if you read the lyrics of the song, “Murder by a minor”! We thought it would be good to introduce ourselves and our friends to some culture, so we went extra sacrilegious with this one! Listen to the complex magic of some of J.S. Bach’s famous melodies coupled with classic straight forward Motherfaster riffs! Also, Bach did a cover of his favorite baroque artist Antonio Vivaldi, which we featured in the solo section of the song. So, it’s Motherfaster covering Bach, who was covering Vivaldi!  Maestro will be turning in his grave! Here is a story of a total bastard that was abusing his wife and daughter, only to find a fitting end!

Also sorry for the cover too… We did that on purpose.

Motherfaster formed after a jam session during the end of 2011. They are based in Athens with the common purpose to extract the dirtiest side of their souls and present it as an audio insult.